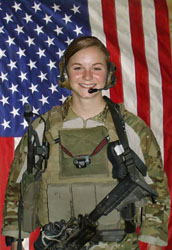 She is survived by her husband Captain Jason Stumpf, her parents Robert and Deborah, brother Josh, and sister Brittney.